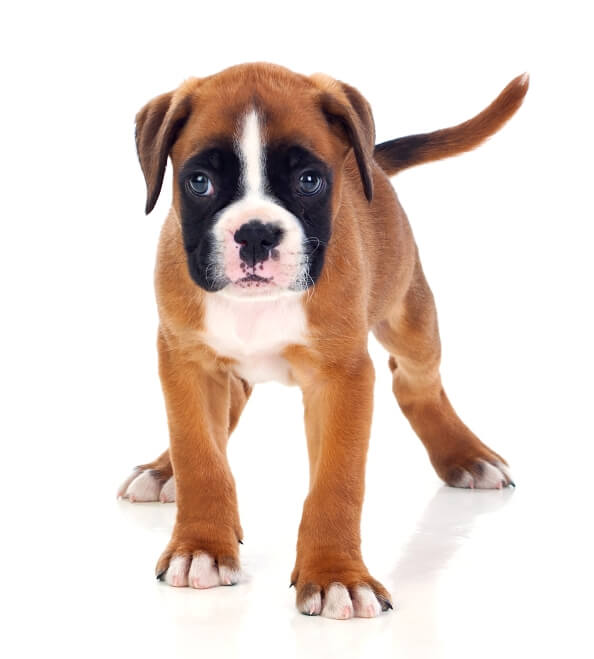 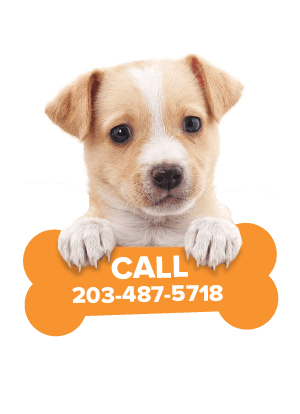 If you’re looking for a dog that’s fun to be with and not that big in size, then you should consider buying a Boxer puppy from CT Breeder. Nowadays, boxers have become popular for most pet owners. It is because despite their medium size build, they are considered as working dogs. They were first developed in Germany. Later, they were bred around the world. They are also now recognized by the AKC or known as American Kennel Club. The American Kennel Club is one of the major dog registries. They have strict guidelines to the kind of dogs that are bred to be registered.

Boxers were first bred in Germany. They were made to be working, guard dogs because of their muscled, lean build. In the 19th century, they were bred to be bull baiting dogs. Later, they became helpers for butchers and keeping cattle under control in slaughterhouses. Boxers came from the line of bullenbaiser breeds which are now extinct that are paired with bulldog and mastiffs. It is possible that boxers were also cross-bred with terriers and Great Danes. Boxers actually got their name from how they play with their forepaws. Others say their name comes from the German word boxl, the slaughterhouses they came from.

Boxers were not popular in America until after World War I. Since then, they were the first dogs to be used as police dogs. They have also been used as seeing-eye dogs.

Characteristics of a Boxer Dog 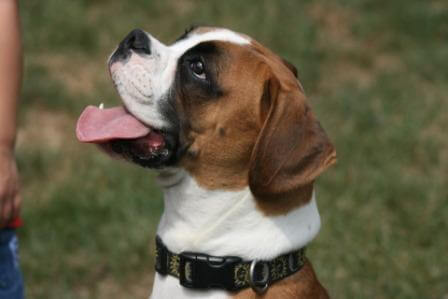 Boxers are typically medium sized dogs with a short back and tail. Some are also larger built. They are built with a solid body that usually stands at attention. Their jaw also has an underbite, which means their teeth protrudes outside their mouth.They are actually made bred working guard dogs. They have a square-head that makes them look menacing and intimidating. However, boxers are not as fierce as they appear to be.

Male boxers can weigh up to 65 to 80 pounds which is around 30 to 36 kilograms and can grow up to 25 inches. Females, however, can grow up to 21 inches and weigh lower than male. Females would weigh around 22 to 30 kilograms.

They have a broad chest and a short, muzzled, snout. Boxers’ stance are usually tall, regal and erect which gives them that intimidating look. Their bodies are usually taut and tight with muscles that are usually noticeable. The ears are supposedly cropped but most are naturally folded.

The boxer’s fur coat is short and shiny. They also don’t shed a lot. Most of the colors of a boxer would be brindle, mahogany or fawn. Some may or may not have white flash markings seen on their chest area. So, it is not difficult to groom them.

Boxer dogs are highly intelligent. They like to stay busy and active. They love to be around people and are not loud barkers. They only bark when they see something unusual. When this happens, it is important to always take note.  However, they do give out sounds like snorts, grumbles and small growls. These are actually just their way of talking. A lot of people find these sounds adorable. They also snore frequently when they sleep.

Even with their menacing looks, boxers are actually friendly and playful. They are affectionate towards their owners. Not only that, they are fiercely loyal to their owners and will guard their family and their home from strangers. They are also known to be affectionate to children as well. This makes them a good companion for owners with families.

Boxers are great with other pets. They easily get along because of their witty, high energy behavior. However, it is important to keep them away from neighboring animals outside the house. They are known to attack other animals randomly. They also can be aggressive to their own species especially towards the males. It is important to always keep them supervised at all times when they are outdoors. Also, they should already begin socializing with other pets at a young age.

Boxers are also stubborn. They can usually get away from trouble. They would also pout once they feel they are not getting what they want. Because of this, potential boxer owners should always show the dogs that they are the ones in charge.

Any living being can be prone to various health problems. Unfortunately, unlike most dogs boxers have a shorter lifespan. Moreover, boxers can live at most 10 years. Majority of the diseases reported that boxers are prone to are cancer and heart disease. They can also contract digestive diseases, eye diseases, skin tumors and even allergies.

They are also prone to back and knee problems, including arthritis.

Also, boxers are known to slobber excessively. It is because of their loose lips that they slobber and drool naturally. It is not something to be worried too much about. However, it is important to also keep your boxer dogs away from high amounts of heat.

When boxers eat, they gulp in air and as a result causing an excess amounts into their stomach. The excess gas, of course, needs to be released. Hence, there are some digestion problems. This can be remedied, though, by a change in their diet. There are pet stores that specialize in meals intended for boxers.

These puppies are also sensitive to extreme temperatures even when they grow older. They are very prone to heatstrokes. Make sure that they get ample amount of water and shade when they are taken outdoors. At the same time, they also cannot be in extremely cold temperatures. 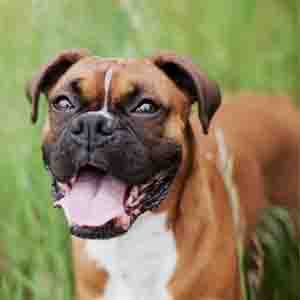 Boxers are bouncy, playful and active. Because of this, they need to be outdoors all the time. They cannot sit still when kept indoors for long periods of time. They constantly need long walks daily. They should also be kept physically active and mentally fit. The kind of vigor boxers have are suitable for large families with children. They are also good for individuals who live an active lifestyle and high energy. People who like sports and games are a good match for these pups. Pet owners are expected to be jumped by them because of their bouncy and bubbly personality.

Training boxers is not usually a challenging task for breeders. This is because boxers are smart and intelligent. They can learn very quickly. They can easily understand and do what is expected of them. However, training should be done consistently. Because they are strong-minded, boxers usually would play the leadership role. They are usually like that especially if they are around other pets in the house. They are reliable when it comes to keeping things in control with other pets.

Getting a New Puppy

When you keep a boxer, you are assured of a loyal, devoted dog that will stand by you all the time. So if you’ve set your mind to keeping one, don’t hesitate to find the right Boxer puppy at CT Breeder today.