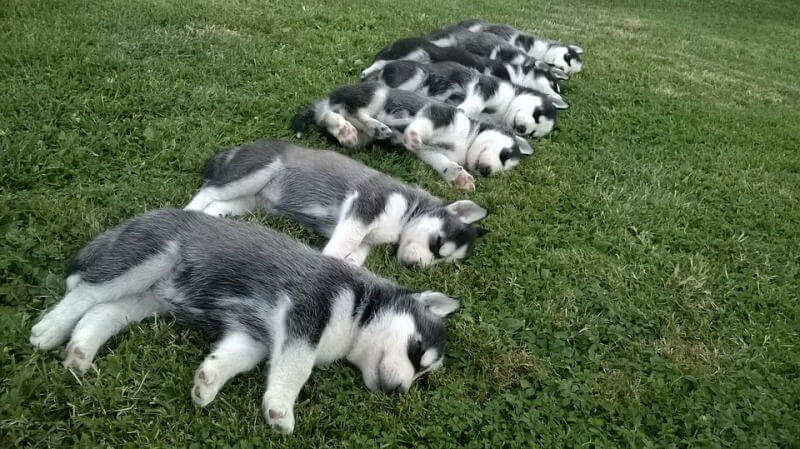 While puppies are all cute, what are the cutest dog breeds?

Seriously, how does one choose just a single dog breed to claim the title of the cutest dog breed? There are so many of them, and mentioning one without mentioning another will just be unfair to these fluffy creatures who are innocent and have done nothing wrong to you. So rather than assigning one as the cutest of them all, let’s just name ten of them in no particular order and call them cute puppy breeds that grow up to be adorable pets to have and own and cherish forever.

This dog has beauty and brains! There are highly intelligent dogs and are able to learn tricks relatively fast. Otherwise known as the “Aussie”, these shepherd dogs are medium-sized and despite its name was originally from Europe. Many theories surround how these cuties became assosiated with Australia but there have been no absolute finalities.

Known for their versatility and trainability, the Australian Shepherd clearly aims to please and are very obedient. They are also very energetic and agile which makes them great at tasks like catching frisbees, being guide dogs, therapy dogs, service dogs, and of course, rightfully earning the title of being one of the cutest dog breeds.

Like the Australian Shepherd being known as the “Aussie”, the French Bulldog is known as the “Frenchie”. They are small domestic dogs and in the top 5 of the most popular dogs in the United Kingdom. Typically described as active, muscular, heavy, and well built, these cuties have large square heads with the top somewhat flattened and their muzzles broad and deep and their muscles well developed.

Some French Bulldogs are not perfectly proportionate but their playful nature and love for their owner put them in the list of the cutest dogs!

Known to have an even temper and a gentle disposition, the Beagle is typically neither aggresive or timid. Their cuteness comes from enjoying nothing more than companionship. To ensure the attention of men and women of all ages, Beagles have that killer sad eyed expression and long droopy ears and when they feel the love from a person, the expression of their eyes light up and it is as if the problems of the world had just gone away.

In fact, Beagles fall for human interaction so much so that they would make awful guard dogs. A thief in the night could probably pet your Beagle, possibly named Snoopy, and after a minute of love, could run off with your television set.

Did you know that the Pembroke Welsh Corgi is so cute that the queen of England, Queen Elizabeth II, had over 30 of them in her entire lifetime? And why not? Is there anything you don’t love about these crazy cute dogs? They’ve got erect ears, beautiful beady eyes, a snout you just want to kiss, and a temperament of just wanting to be a part of the family.

They follow their owners wherever they go, they aim to please, they learn quickly and can be trained to do any number of tricks, and can even function as guard dogs wherein they can be taught to only bark when needed. They are particularly good with children and have a need to socialize too. Put all of these together and you’ve got one of the cutest breeds of dogs there are.

Am staffs are one of the breeds more commonly known as pitbulls. Though their reputation is that of a savage beast, don’t be fooled. American Staffordshire Terriers and good natured dogs that are smart and just want to be part of your family.

Their medium-size and short coat match oddly with the other cute dogs on this list who are also people oriented, love having tasks at hand, wants nothing more than your love, and is very loyal to his or her family. With all these traits, the Am Staff deserves the right to be on this list.

Also known as “Shelties”, Shepland Sheepdogs love cuddling and are very good with children. They are smart, easily excitable, have tons of energy, and are out to please and work hard. This is all done for your love. Isn’t that the sweetest thing you’ve ever heard? Doesn’t that make you just want to seek out cute puppies for sale?

Their level of intelligence, as a matter of fact, rank as one of the most smartest dogs having ranked 6 out of 132. Dr. Stanley Coren determined this when he discovered that the Shepland Sheepdog could learn a new task with less than 5 repetitions before doing the command.

intelligence, soft fur, high energy, and a love for humans, there’s no question that Shelties are one of the cutest dog breeds ever.

Of course the Golden Retriever is on this list! Not only are they one of the most popular dogs in the world, but they are so good looking that it almost seems as if they’re always ready for a camera to snap a few shots of them.

But Golden Retrievers aren’t just cute because of their good looks, they have many character traits that have made them one of the most desired dogs the world over. They are playful, love the water, can run for days, are gentle with children, can fetch all sorts of objects, and have been known to allow babies to pinch, poke, and squeeze all parts of their bodies even if it may seem irritating for them.

The first thing you’ll notice about these cuties are their long ears. They like to run and it’s the cutest thing to watch their ears flap up and down as their elongated bodies move across the floor. The next things you’ll notice is that they have short smooth hair and have an unfair advantage of being ridiculously good looking.

Dachshund’s are playful and since a part of their history was to chase burrow dwelling animals, it is with no surprise that they still give chase with birds, small animals, and of course, tennis balls. As cute as they are, not all Duchshands are completely friendly with children, so learn your pets temperament before setting kids free to roam a house with these cute, but sometimes threatening animals lose.

Ok, how do we put this into proper context? Let’s just say that the Siberian Husky is so cute, that the only thing cuter than a Siberian Husky is a whole lot of Siberian Husky’s. Let’s understand this better: they are medium-sized dogs that need to be in cool weather (remember, they are from Russia), have very thick coats, the cutest erect ears you’ve ever seen, and a smile that can melt a few hearts at once, at will.

They’re energetic, love to play, howl instead of bark, can dig through the ground, are able to jump over fences, and can chew through your furniture. They are also great with kids and children are able to lay in their fur for prolonged periods of time with the Husky simply waiting for them to finish.

Regal in many ways, the English Setter is nicknamed the “gentleman of the dog world”. They’ve got style, class, strength, and have great patterns on their medium-sized bodies. They also have relatively long silky hair with fringes at the back of their legs, under their stomachs, and on their tails.

English Setters have endurance and athleticism and are able to hunt down an airborne scent marked as their prey. But they also love a good family and receive no greater pleasure than receiving attention or working with humans. Naturally full of energy, English Setters would prefer to receive up to two hours of exercise per day which shouldn’t be hard to do considering the fact that they are very friendly and good natured. Kids have no fear, they may seem hyperactive but they’ll treat you with the gentle care you need.