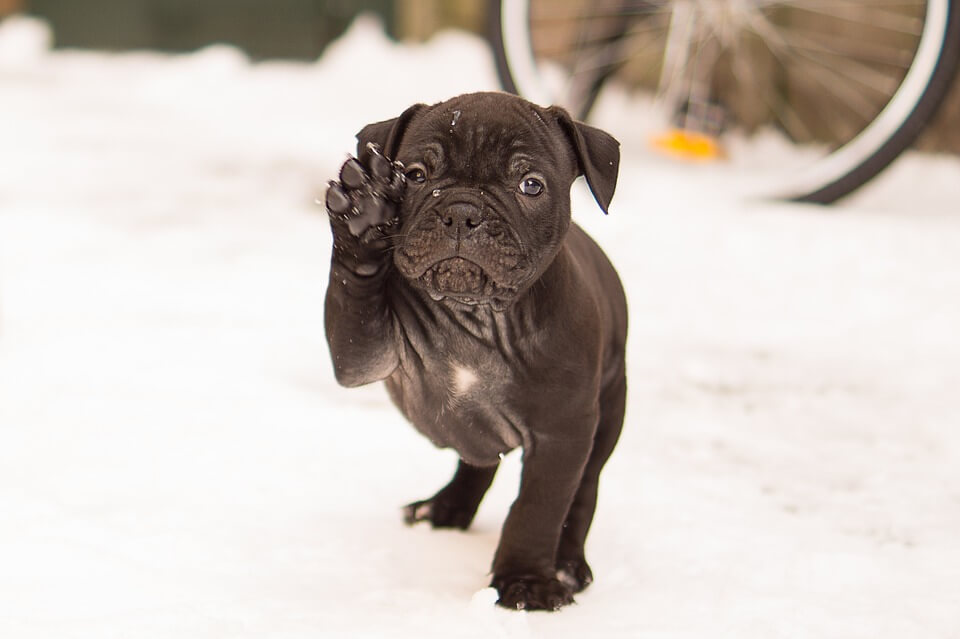 We all know that there is something absolutely addicting about seeing a little puppy. Their big round beady eyes, that soft fur, the fat cheeks, and the little whimpering sounds that they make are all natural qualities in puppies that make them absolutely irresistible.

Though there is no actual competition, we are here to list down our top 10 cutest breeds of puppies. A warning for those about to continue reading below, contents may make you want to find some cute puppies for sale! If not that, then you can be sure to at least find yourself saying a few “aww’s” in the next few minutes.

Here is our list of the top 10 cutest puppy breeds:

I can’t quite put my finger on it, but there’s something about these wrinkly puppies that are able to make even the toughest human heart melt! Haven’t you ever noticed that English Bulldogs, also known as British Bulldogs, are often used on greeting cards and advertisements? These muscular, hefty puppies have the cutest wrinkly face and a punched in nose and in British culture, are considered to be a national icon and symbolize determination. Though they can be very naughty, they also exude dignity and are considered courageous as opposed to aggressive or vicious.

Not only are Golden Retrievers one of the most child friendly dogs in the world, but they are also one of the cutest puppies. Often used in commercials, these puppies are relatively easy to train, are obedient, and remarkably irresistible. Known to have a love for the water and being easy to train, Golden Retrievers need loads of outdoor space to run around and play, but they also need to be housed otherwise their instincts to roam may get them lost.

Here is another puppy that gains the immediate attention of people old and young. Labradors can stop almost anyone dead in their tracks with their bubbly personality and smiling faces. There is something about them that makes us just want to pause the world around us so that we can spend a few moments petting them, as they equally enjoy your hands all over the heads and bodies. As labradors get older, they are frequently trained as therapy dogs who help the blind, assist law enforcement agencies, and as a testament to how magnetic their kind energy is, they also aid people with autism.

Corgi’s as adults are dogs that have been used to herd animals such as sheep, but long before their days as herders, Corgi puppies were born with a natural instinct to be involved with a family. They are very affectionate and will tail your every move as much as they can. Because they have a natural tendency to want to please their owners, they are easy to train and hungry to learn. Having short little legs and ears larger than their bodies don’t hurt in making a human fall in love with them.

Often nicknamed the Frenchie, French Bulldogs in 2014 were the fourth most popular dog in the UK, and the sixth most popular AKC registered dog breed in the United States. Similar to the English Bulldog, their flat faces and massive ears make this puppy a rightful breed on this list.

Ok, is there anybody that can resist the thick, soft, and puffy hair of a Pomeranian? This fluffy coat matched with tiny ears, a positive spirit, a playful heart, and tiny beady eyes make the Pomeranian a super cute puppy! Not to mention one of the most fun dog breeds to play with! But don’t let their playful nature fool you, Pomeranian’s have also been known as regal dogs and have been owned by members of royal families. Beyond that, they can also be very loyal to their owners and have also been known to be aggresive towards other dogs who may seem to pose a threat.

If in a competition for the cutest puppy, the Cavalier King Charles Spaniel has an unfair advantage because of their sad face look. Once your eyes lock in with theirs, that’s it, end of story. Your heart is sure to turn to slush as your emotions beg to do anything to make them feel better. To make matters worse, these toy dogs don’t do too well when left on their own for long periods of time, which is why it is recommended to spend loads of time with them.

Remember the movie Beethoven? Do you recall the massive damage that this puppy was guilty of nearly every day of the lives of the Newton family? And is your overall memory of that film how lovable Beethoven was? That’s because the Saint Bernard is another sad eyed dog that you can’t help but love with all of your heart. They’ve got big squeezable paws, super soft fur, and the best huggable bodies! Let’s not forget, that Saint Bernards are one of the largest breeds of dogs, but are forever puppies in their playfulness.

Another sad eyed dog on the list, the Basset Hound stands separate from the others as its features are unlike the rest. The most notable feature of the Basset Hound are their large ears. They droop down, much like their eyes and soft skin and somehow manage to make all humans squeeze them all over!

This list would not be complete without the Pug. Though unconventional, there sure is something about these little wrinkly, tiny faces, and their curled tail that simply attract us to them with no end. Known as sociable and good companions, Pugs are continuing to gain popularity as many celebrities are proud owners of these cute little puppies.

And now you know why puppies are so cute! Although you probably didn’t need this list to tell you that, simply walk around your neighborhood and you’ll find cute puppies for sale or spend time with your families and hear your nieces and nephews asking for cute puppies for Christmas and their birthdays!