Which One Is Better: The English Bulldog or The French Bulldog? 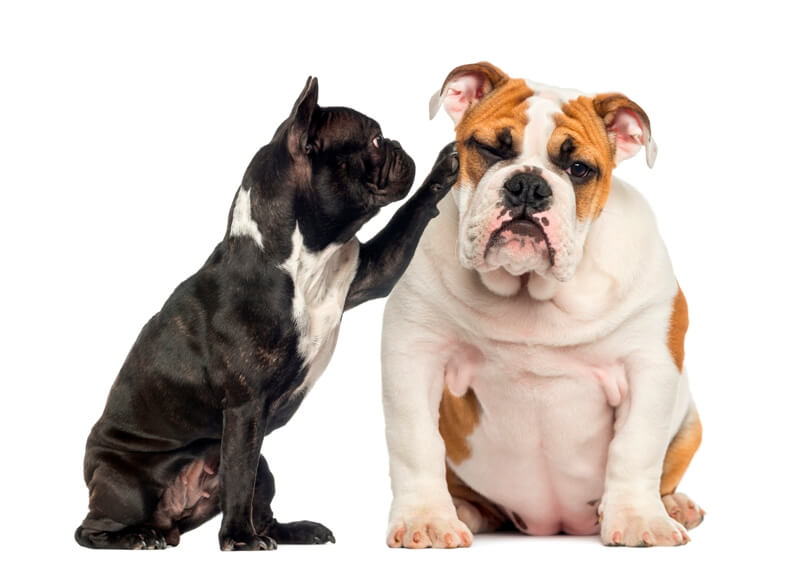 The English bulldog, otherwise known as the British Bulldog is from a different breed and lineage from the French type. English bulldogs are larger than their French cousins and have folded or rose-shaped ears whereas French versions have large upright and pointed ears.

French bulldogs are often described as wonderful friends that hardly bark and are for the most part patient and calm. They are also very good with kids and are in fact also good companions of other breeds.

English types are patient too. They have proven themselves to be incredible pets but can also be very sensitive and often become too attached to their owners, so much so that they may even be reluctant about going out into the garden on their own.

Both French and English bulldogs are pure breeds that are registered with the American Kennel Club.

English types are typically born with short tails although there have been a number of random, and very rare instances where they were born with long tails. Some describe them as being like a couch potato while French versions tend to have more energy. However, regardless of which type of dog you prefer, you can be sure that your bulldog will be wonderful, unique, and lovable.

These type of dogs were descended down from the Asiatic Mastiffs. They were originally used in bull baiting arenas because they are strong and brave dogs that aren’t afraid of bulls. It wasn’t only until bull baiting was banned did they become household pets.

Bulldogs, whether English of French, have large heads, short muzzles with an undershot jaw and a strong square build! They both drool a lot and are quite loud when they breathe.

The English bulldog is the classic bulldog. They are medium sized dogs with large heads and wrinkled faces. Their legs are short but their stance is wide. Though they look gruffy they are actually gentle and love receiving attention.

The French bulldog, also known as the Frenchie, is quite a small dog. And though they aren’t as popular, there is no shortage of French bulldogs for sale. They are roughly the size of a pug. They are also rather stocky and have short legs. Everything about it is smaller than the English version, almost as if they were sized down to a smaller scale. They are great lap dogs and are fun to play with. They’re also affectionate and aren’t yappy. They also have less health issues and are expected to live until an older age.

English versions are also louder and bark more which also helps protect your house but that isn’t to say that they bark a whole lot, although they will protect you from intruders. British types are also lazier and don’t like going for walks as much as their French counterparts. They are thicker and wider and hence are not as active as the Frenchie.

Caring for your these pets, whether English or French is not that hard. They both have rather short hair which makes grooming easier to do, as opposed to other long haired dogs. In general, these dogs are not that difficult to take care for and are perfect for owners that don’t want to spend that much time or money taking care of them. The English versions will shed more hair but this is a characteristic important for them as this is when they lose old or damaged hair.

They can both be trained but this may come with great difficulty. First time owners beware as you will need a great deal of patience and perseverance and may even seek the help of an obedience school.

The English and French bulldogs also need minimal exercise. Though Frenchie’s are keener on taking walks and English types are harder to get out of your house, both will certainly need some exercise in order to keep them in shape. Pet owners who do not spend that much time at home or are away most of the time may want to opt for another breed, one that is more independent.

As for caring for your kids, the English version is the better choice as they tend to grow quite close to your children and they can be raised with them to be great friends.

In terms of spending for a brand new puppy bulldog, expect to spend about $1,600 for an English type and $2,050 for a French version.

English and French bulldogs also live fairly decent lives in terms of number of years. The English type lives from about 8-10 years whereas the French lives to about 9-11 years. Their height barely differs but the English grow about an inch more than the French at 15 inches.

Their weight however is where we see a big difference. English bulldogs can weigh as much as 55 lbs but the little Frenchie’s only grow to a weight of about 28 lbs.

They also have quite a few differences in terms of character traits. English bulldogs are more aggressive and courageous, but they’re also more friendly and loving. They’re also more social and sweeter. French types though are more affectionate, alert, cheerful, independent, loyal, playful, and quiet. You may want to also note that the English bulldog is good with kids and are relatively cat friendly but the French type isn’ta

As we said at the beginning, either way you put it, whether you get a cute little French bulldog puppy or a stocky and heavy English one, you’re going to have a great time with them and they will be great pet dogs to have during their entire lifetime.