When to Start Training a Puppy 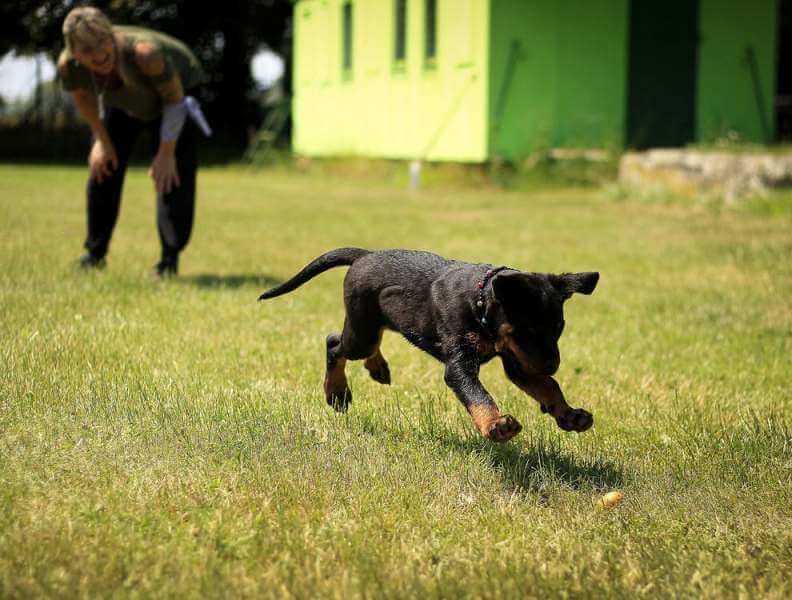 Traditionally, dog trainers have suggested putting off formal training until 6 months of age, but as of late, studies reveal that waiting that long can be detrimental to your efforts. As soon as puppies can lift their heads and walk on their legs, they begin to learn from every experience they go through. Putting off training between then and 6 months means many missed opportunities to teach your pup something useful to both you and her. That being said, the sooner you begin to train your pup, the better.

Good breeders such as those at CT Breeder begin training their litters at as young as 7 to 8 weeks. Though young puppies have very short attention spans, they quickly learn to comprehend commands such as “sit,” “stay” and “down,” all commands that lead to greater obedience in the future. Not only is early training great conditioning for a puppy, as it exercises their brain muscles, but also, it helps prevent them from forming bad habits. Anything you allow your pup to do for more than two weeks to 28 days from the time you bring her home until the time you begin training her will become habit, and habits are hard to break.

To keep bad habits to a bare minimum and to ensure that you and your pup have a loving and understanding relationship from day one, begin training immediately. The sooner you start to train your pup, the sooner she’ll start to respect you as her “pack leader,” something all dogs need, and something all dog owners want to be.

When you bring home a new puppy, there are some basics things that you want them to know as soon as possible. Those things are all regarding her daily routine and should include:

Teaching a new pup these things is not as easy as pointing and demanding. HOW you teach your dog these things matters, and can mean the difference between a semi-obedient dog and a loyal pooch. Teach your dog the right way and she’ll let you make decisions on her behalf instead of making them on her own.

Words are always best. Teach your pup early on words like “No” and “Good,” and be sure to inflict the right inflection when using them. This way, your dog not only understands what the words mean but also, she will associate the tone you use with “no” with, “I’m doing something bad,” and the tone you use with “Good” with, “Keep doing that!”

Avoid treat training as much as possible. Though this is a very popular method, it teaches your dog to only do something for you if you do something for her in return. Additionally, it puts your dog in control. For instance, if your pup decides that she doesn’t want a treat when you tell her to stop chasing a squirrel, she won’t see any harm in not coming when you call. This is not only a demonstration of outright disobedience, but it could put her in harm’s way if she decides to do something more dangerous, like chase the UPS man or mailwoman.

Also avoid negative physical interaction. Hitting a dog, muzzling them, tying them to a tree or any negative physical treatment is not only counterproductive, but it’s also inhumane. If you hit your pooch, she will learn to fear you, not respect you; build a relationship based on trust and respect, and she will want to make you happy by being obedient.

The best approach to training a puppy or even fully grown dog is to respect her. Use your words as you would with a child or other human adult, avoid bribes (again, as you would with people) and don’t hit. It’s that simple.

Housetraining your pooch will be one of the most difficult things you do with her, but once it’s over, it will be a relief to both you and her. To make things easier on the both of you, begin housetraining at about two to four months, right when they start to understand the concept.

In the early days of training, make sure that your puppy has a place to relieve herself where she feels safe, such as on a bush in the backyard. Bring her to that same spot every morning after waking up, evening before going to bed, and once every two hours in between (and directly after eating); this is important, as repetition is essential to learning a positive habit.

Every time your pooch successfully relieves herself outdoors, reward her with praise, a pat on the head. If your pup accidentally goes indoors, do not get angry. Simply yell “Stop!” or “No!” if you catch her in the act, and then pick her up and bring her outside to finish her business. If you find the mess after the fact, there is no use yelling at her, as she will not associate what she did with your harsh words.

With consistent efforts and praise, your pooch will be housetrained in no time.

Just like with the “basics,” it’s important that you begin to teach you dog the household rules from day one. “Household rules” include what is and is not allowed to be used as a chew toy, what furniture she’s allowed up on and which she must steer clear from, rules on begging and acceptable places to rest. These rules will not only protect your belongings in the future, but also, they will keep your dog safe and healthy. For instance, if your dog thinks it’s acceptable to chew on wires, she could be electrocuted. If she is taught that it’s okay to eat table scraps, she could choke on a chicken bone. If she isn’t taught to stay off of certain furniture, she could end up falling and hurting herself. Like with children, it is important that you set boundaries with your new puppy, as boundaries are ultimately what keep her safe.

If you live in an urban area, don’t have a large yard to let your dog run around in or plan on taking your dog with you everywhere you go, it’s important that you start leash training as soon as she’s able to fit comfortably in a collar. Leash training, like housetraining, can take a bit of time, but with patience, encouragement and understanding, your dog will soon be a loyal and obedient pup on a leash.

At CT Breeder, we work with a number of experienced and talented trainers who want to ensure that you and your pooch have a loving and respectful relationship. We offer complimentary training for life for individuals that choose to buy purebred dogs from us. In addition to obedience training, we offer courses that will give your dog the skills she needs to be the obedient and loyal companion you’ve always imagined your dog would be.

Training a puppy can be difficult and time consuming, but that doesn’t mean that owning a puppy is not worth it. Put in the time and effort, and you will be rewarded with a loving, loyal pooch for life.